Little Yangtze is a location in the northwest quadrant of Big MT.

It is a pre-War internment camp where Chinese-Americans (officially considered saboteurs and spies) were imprisoned before being used by the Big MT scientists for experiments. The inhabitants did not always understand English fully, providing camp guards with an excuse to use violence on them. Subject retrieval methods used by the Big MT staff led to a great amount of distress among the prisoners. After the War, due to the subsequent fallout and radiation left because of it, some prisoners turned into ghouls, but due to the bomb collars on their necks, could not leave the camp. As it stands, they were forced to eke out a pathetic existence for over two centuries, locked inside the prison camp.

In the late 23rd century, Elijah rediscovered Big MT and for a time used Little Yangtze as his base of operations, reverse engineering the technology used to force prisoners into submission for future use. He was apparently searching for a specific frequency, and used the bomb collars and the prisoners as test subjects.[1]

The prison camp itself consists of a square shaped fenced-in area with four gates. Each corner of the square has a field tent with many bunk beds. This section is occupied by four crazed ghouls, who were pre-War Chinese-American citizens.

To the north of the camp is a ruined building which was used by Christine Royce as a sniper post. Her rifle, a dose of steady and ammunition can be found on the second floor.

To the south of the camp there is a ridge on which unique ghouls Number 27 and Number 34 spawn.

Outside the east gate of the camp, there is a watchtower which was used as a base of operations by Elijah during his first few days at Big MT. Outside the watchtower are ammunition boxes and Elijah's LAER. A dead Yangtze prisoner is inside the watchtower along with multiple deactivated bomb collars and a broken detonator. A terminal has several log entries from before the War and from Elijah's stay at the Watchtower. 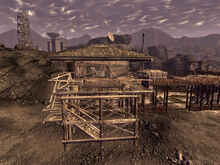 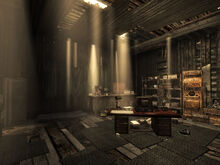 The tower's interior
Add an image to this gallery

Retrieved from "https://fallout.fandom.com/wiki/Little_Yangtze?oldid=2837801"
Community content is available under CC-BY-SA unless otherwise noted.