Old World Blues
“So we had a group of Chinese prisoners to experiment on... those were the days...”— Doctor Borous

Little Yangtze is a location in the northwest quadrant of Big MT in 2281.

Little Yangtze is a concentration camp located at Big MT. Before the Great War, Executive Order 99066 designated certain areas as military zones, and the Chinese-Americans in these zones were to be relocated to internment camps. However, under the guise of establishing a detention center under the provisions of the executive order, Little Yangtze was set up as little more than a storage area for Big MT test subjects in the form of Chinese citizens,[1] deemed a "human farm" by the Think Tank.[2] On its very first day of operations, the camp was filled with three entire trainloads of prisoners, some of who had a very limited grasp of English, which prompted vigorous nightstick-assisted explanation from camp guards.[3]

The squalor of the camp, as well as abductions of inmates for research purposes and brain extraction (as Big MT was perfecting robobrain technology at the time), resulted in a constant tension among the prisoners and their guards, as the former was constantly looking for ways to escape the camp, while the latter had to work triple shifts to cover the camp and catch escapees. The resulting morale impact prompted the camp commander to requisition freshly prototyped explosive collars to stop escapees dead in their tracks.[4][5]

After the War, the military abandoned Big MT and left behind the prisoners still locked up in the camp. The radioactive fallout turned the survivors into ghouls, but due to the bomb collars on their necks, leaving the camp remained ill-advised. As it stands, they were forced to eke out an existence for over two centuries, locked inside the prison camp. In the late 23rd century, Elijah rediscovered Big MT and for a time used Little Yangtze as his base of operations, reverse engineering the technology used to force prisoners into submission for future use in breaching the Sierra Madre, searching for a specific frequency, and used the bomb collars and the prisoners as test subjects.[6][7]

Situated in the northwest quadrant of the crater, the prison camp is a fenced-in area with four gates. The interior is filled with field tents containing rusted bunk beds, with a number of makeshift graves outside. The small surviving population of insane, ghoulified survivors continue to eke out an existence, unable to leave the perimeter. Two former inmates, ghouls Number 27 and Number 34 managed to escape the perimeter, but continue to shamble around the perimeter with little grasp of their remaining mental faculties.

North of the camp is a collapsed building containing a Christine's CoS silencer rifle, a dose of steady and ammunition on the second floor. The building was used by Christine Royce as a shooting position while she tracked down Elijah. However, she was captured when she tried killing the rogue elder.

The camp has a single watchtower, which was used by Elijah as a workshop during his first days at the Big MT. When he was forced to move due to the run-in with Christine, he left behind his LAER, alongside deactivated bomb collars and other work materials he used to crack the bomb collars. 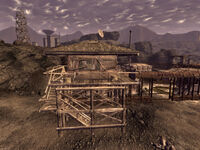 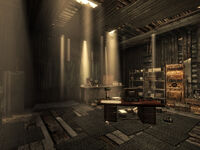