Picking Up the Trail
Rescue from Paradise
Those!
Happy Birthday to You
Fungus Deal
The Kid-Kidnapper
Zip's Nuka Fix
Biwwy's Wazer Wifle

Great Chamber in the northwest, Souvenir shop in the center north, Food ("Spelunkers") in the center south, and Lucy's Doctors office in the southeast. Entrance from southeast; exit to Vault 87 in northwest and Murder Pass to the north

Little Lamplight is a pre-War underground cavern tourist attraction made into a settlement in the Capital Wasteland in 2277, run and populated entirely by children under the age of 16.[1]

Discovered in the late 19th century, Lamplight Caverns was converted into a tourist attraction during the 1920s. Due to the location's strong government ties, Vault-Tec achieved ownership of several portions of the caves, for the purpose of Vault 87's construction.

As of 2287, the settlement's fate is unknown, although MacCready is alive for the events of Fallout 4, meaning he would have been forced to leave by 2281 when he turned sixteen. Considering the age of MacCready at the time the Sole Survivor meets him most, if not all, of the children who had appeared in Fallout 3's Little Lamplight would have likely been kicked out.

A small cave descends to the town's entrance area, which is protected by a fence with a large front gate. Beyond the fence, a small area with the Little Lamplight office building, the town's medical office and school, opens into two small corridors. The first corridor leads to the restaurant Spelunkers, situated in a cave with pools of water, and the Great Chamber beyond. The second tunnel leads to a medium sized cave which contains the Lamplight restrooms, and the souvenir shop, the town's store. Another access to the Great Chamber can be found here, as well as a small path to the town's back gate, leading to Murder Pass.

The Great Chamber area is a huge cavern, with wooden walkways connecting various suspended rooms. It serves as the main living area for the Little Lamplighters, containing a number of beds. The floor of the cave is partially filled with rubble and slightly-irradiated water. Besides the two exits leading to Lamplight caverns, there are two cavities in the chamber's wall; one contains a workbench, and the other leads to Vault 87's Reactor Chamber.

Little Lamplight appears only in Fallout 3 and is mentioned in Fallout 4. 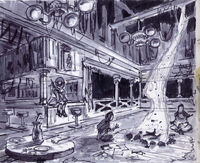 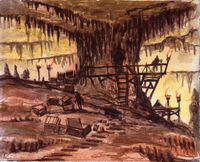 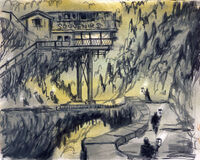 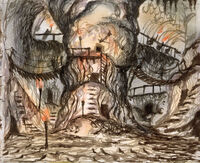 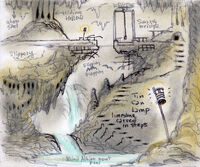 Murray the Mole above the entry

Retrieved from "https://fallout.fandom.com/wiki/Little_Lamplight?oldid=3467184"
Community content is available under CC-BY-SA unless otherwise noted.