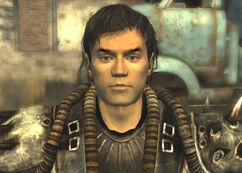 “I'm all for risking my life, but I'm a little sensitive about my asshole.”

Little Buster is an ex-merc turned bounty hunter living at Camp McCarran in 2281.

Hardly working but not working hard, Buster has a long resume filled with various jobs he always bored of before long. Before taking up bounty hunting, Buster was a caravan guard but quit because he was expected to wake up early in the morning, a routine incompatible with his required sleep of ten to twelve hours per day.[1]

Little Buster talks big about both himself and his accomplishments, claiming to be "one of the greatest" bounty hunters in the wasteland, having killed dangerous marks such as Night Terror and Jackson, and boasts an incredible single month of experience (longer than most jobs he has held).[2][3] Major Dhatri comments that even if Little Buster talks a lot, he is still alive from bounty hunting and has claimed bounties, so "he can't be completely full of shit."[4]

Like many of his jobs before, Buster's losing interest, getting tired of the amount of work bounty hunting calls for, and not invested enough to risk his life on a daily basis,[5][6] and is moreover dissatisfied with the lack of glory or other perks he has been able to obtain; ready to move on.[7] His next plan for easy money is to "win big" gambling at Gomorrah using his bounty hunting earnings, reasoning that since not too many people go to Gomorrah, that means his odds at winning are higher.[8] This is not to be, however, as Little Buster meets his end in an alley of Freeside.[9]

After completing Three-Card Bounty, Little Buster's body may not show up anywhere near Freeside. This can be circumvented on PC by using the console command prid 172944 enable. [verified]

A dead Little Buster, on the tracks next to the Old Mormon Fort
Add a photo to this gallery