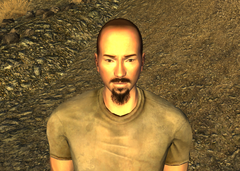 Little Beard without his head wrap

“Just talk to big beard next to me, pal. Whoever's got the biggest whiskers does the talking.”

Little Beard is a gun for hire in the Atomic Wrangler Casino in Freeside in 2281.

Little Beard can be hired alongside Big Beard. The player can't engage in conversation with Little Beard, as he claims that "the one with the biggest whiskers does the talking." Little is known about Little Beard, but it can be assumed that at some point, he grew a little beard and teamed up with Big Beard.