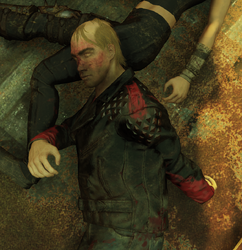 Line Chef Larry is a member of the Blood Eagles in Appalachia in 2103.

Larry was one of the chefs for the Blood Eagles at Bloody Frank's. He made a recipe which he called "Larry's Lowcountry Mirelurk Boil," based on old seafood recipes his mother used to cook.[1]

Line Chef Larry appears only in Fallout 76, introduced in the Wastelanders update.

Retrieved from "https://fallout.fandom.com/wiki/Line_Chef_Larry?oldid=3301183"
Community content is available under CC-BY-SA unless otherwise noted.