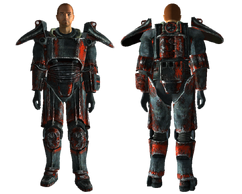 Linden's Outcast power armor is a suit of power armor belonging to Branchtender Linden, a former Outcast of the Brotherhood of Steel.

Linden's armor is a moderately resilient suit of power armor, with the added bonus of giving an increase of 5 in the Big Guns skill, an exception to the normal T-45d power armor modifiers.

It can be obtained from him by using the Laurel's liniment on Harold's heart during the Oasis quest. When the player character finishes the quest, they can talk to Branchtender Linden for their reward.