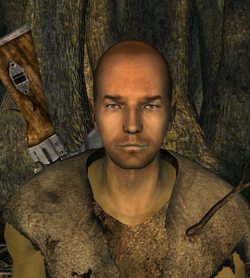 “Look around you, Outsider. This place wasn't built by man or made by a machine. This place is a miracle and only a god can perform a miracle.”

Branchtender Linden is one of the Treeminders, who in 2277 lives in the Oasis.

Linden was born in 2252.[1] He is a former member of the Brotherhood Outcasts, and by extension, the Brotherhood of Steel. Almost killed by deathclaws during a tech scavenging mission, he was rescued by Oasis dwellers. That near-death experience and being healed in Oasis changed his outlook on life, and so he joined the Treeminders.

He is now one of the main armed guardians of this sacred settlement. He is generally found wandering the woods of Oasis or on guard relief for Branchtender Maple. Unlike the other Treeminders, Linden does not think that Harold is a god, rather just something special. He professes his loyalty to Leaf Mother Laurel.

Branchtender Linden appears only in Fallout 3.

Linden is the common name in North America for genus Tilia, a type of tree. All of the human residents in Oasis have horticultural names.