Slavers
Temple of the Union (optional)

Fallout 3
“In this temple, as in the hearts of the people, for whom he saved the Union, the memory of Abraham Lincoln is enshrined forever.”— Epitaph engraved above Lincoln's head, after restoration

The Lincoln Memorial is a memorial building located on the west end of the National Mall in Washington, D.C. in 2277.

A large pre-War monument, serving as a United States presidential memorial. It was constructed in remembrance of President Abraham Lincoln.

The memorial is damaged but still standing. Many of its walls are corroded, and the statue of Lincoln is missing its head. When one first arrives at this location, they are threatened by Silas, who tells the player character to stay away from the memorial. They are directed to an entrance to the left of stairs to meet Leroy Walker, who leads Silas and the slavers from Paradise Falls.

According to the slavers, it is kept under guard to prevent slaves from getting any ideas about freedom.[1] One slaver mentions that the site might be demolished to reduce the slave society's awareness of Lincoln.[2]

Before the quest Head of State, the Lincoln statue head is at the Temple of the Union. Hannibal Hamlin sets up a settlement at the Lincoln Memorial and restores the head to the statue if the player character helps him clear the area of slavers. Upon returning after completing Head of State for the former slaves, three tents will be next to the memorial consisting of useable beds. The inscription previously worked on by Caleb Smith is also present above the statue, moved from the Temple of the Union.

In Fallout: New Vegas during the Debt Collector quest, when searching for Lady Jane's caravan in the broc flower cave, the head of the memorial is shown tied to Jane's brahmin.

The Lincoln Memorial appears only in Fallout 3 and in the Atomic Command game in Fallout 4.

After Head of State

Inscription of one of Lincoln's speeches 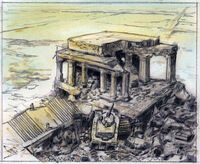 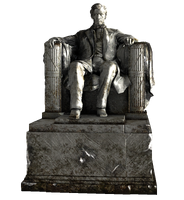 Appears above statue after siding with Hamlin 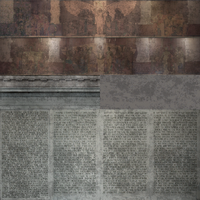