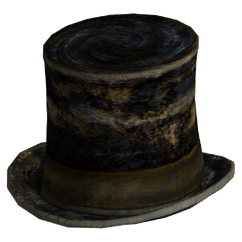 Lincoln's hat is a headwear item that can be found in the Museum of History.

A 19th century black felt, stovepipe hat famously worn by former U.S. President Abraham Lincoln. After 200 years of neglect in the Museum of History, the hat has become worn and tattered and largely discolored with dirt and grime.

From the Museum of History lower halls, enter the offices. Continue forward and head up the stairs. At the end of the stairway, turn right, head down the hallway and enter the first room on the right. It will be filled with rubble; the hat is slightly to the left, by a large desk. The hat is lying on the floor about 6–10 feet from the room entrance on the left. If one can't find the room it is the northwestern room on the local map. One can either fall down to the room from above when going upstairs or get there directly from the offices.

Lincoln's hat atop the rubble