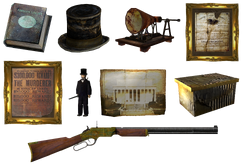 Locations of items in Museum of History Offices

“The words of the great man himself? In his own handwriting? I'll pay 100 caps for it.”— Hannibal Hamlin

The artifacts of Abraham Lincoln found in the Museum of History can be sold to various people in the Capital Wasteland. Besides selling them to "normal" traders for their item value, certain characters will pay increased prices because of the artifacts' historical value or symbolic meaning.

These characters are Hannibal Hamlin, leader of the ex-slaves at Temple of the Union; Leroy Walker, leader of the slavers who occupy Lincoln Memorial; or Abraham Washington, a historian and curator of Rivet City's Capitol Preservation Society.

All nine artifacts can be found in the Museum of History. The letters refer to locations on the map to the right.

A successful speech check almost always doubles the price paid for the artifacts. In Abraham's case, a high barter will double the offer.

There is no way to get back any items sold to Abraham Washington or Leroy Walker, except for the Lincoln Memorial poster. One can, however, steal back the items one sells to Hannibal.

Highest payouts are underlined and bolded.