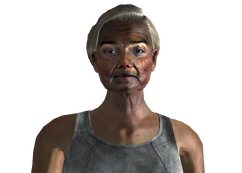 Lily Bowen was a Vault 17 citizen before the Master's Army raided the vault.

Born in 2078, Lily lived a simple life in Vault 17 - until the Master's Army raided the vault. The 75-year old grandmother was dragged outside, where she saw the sun for the first time. Lily was then dipped in the vats of Forced Evolutionary Virus, emerging as a nightkin.

By using console commands, if talked to, she will ask the player character "What do you need?" at which one can only reply "I need to get going."

Lily Bowen as a human is mentioned only in Fallout: New Vegas. She also appears in the game files of Fallout: New Vegas but should not be considered canon due to her only being inside a test cell and being a cut character.

As found in the Cell for Dead "Void Creatures"
Add an image to this gallery
Retrieved from "https://fallout.fandom.com/wiki/Lily_Bowen_(test_cell_character)?oldid=3281334"
Community content is available under CC-BY-SA unless otherwise noted.