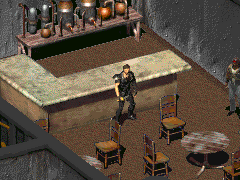 Find out who was responsible for Richard Wright's overdose
Suspect: Lil' Jesus Mordino

“You better get your ass out here, homes, 'fore I take my knife and give you a second smile on that neck of yours.”— Lil' Jesus to the Chosen One

He is described as a tan man, with a pock-marked face,[1] leather jacket and a wicked-looking knife, also named "Little Jesus." He likes to dress in heavy, black leather and has an unhealthy obsession with sharp, bladed items, especially knives. He is a rather aggressive and simple fellow, with something of a tendency to exaggerate his sexual prowess.

Retrieved from "https://fallout.fandom.com/wiki/Lil%27_Jesus_Mordino?oldid=3344933"
Community content is available under CC-BY-SA unless otherwise noted.