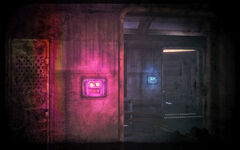 Light Switch 02 is an Automated Personality operating in the Big MT in 2281.

Light Switch 02 speaks to the Courier in a seductive tone and makes comments on their decisions. She is also in a rivalry with Light Switch 01, referring to her as "that frigid little ice queen."

The "Smart Light" and "Mood Light" bonuses are applied to the player character only when one enters dialogue with the light switch and toggles such light. So, after the light is toggled, when the bonuses passes, just re-entering the Sink and be exposed to the light will not be enough to get the bonuses again.