50% less chance of setting off a trap

“You are agile, lucky, and always careful. This perk halves your chances of setting off a trap.”— Fallout 2 In-game description

This perk is relatively broken in Fallout 2. It doesn't affect every mine in the game, just the ones in Redding and outside the Sierra Army Depot.

“With the Light Step perk, you'll never set off an enemy's mines or floor-based traps.”

Traps can still be set off by companions (including "floating" companions such as Sergeant RL-3 or ED-E), possibly resulting in the player character taking damage as well. Only the companions will take damage from rigged shotguns (unless one is in between) and bear traps. Other traps, such as explosive baby carriages, still go off if approached, and grenade bouquets triggered by a floor trap will still go off by making contact with the grenades, or by shooting them.

Note that mines have a high value to weight ratio. With this perk, they can be harvested for resale with no difficulty, making this one of the more profitable perks to have.

When rolling to generate any complications on an Agility-based skill test, may ignore one complication for every 1 AP spent.

In addition, may re-roll 1d20 on any Agility + Athletics test to avoid traps triggered by pressure plates or similar mechanisms. 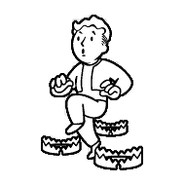