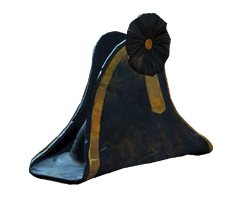 The lieutenant's hat is a piece of headwear in Fallout 4.

Preceded by the Tricorne, the Bicorne is a form of hat widely adopted in the 1790s as an item of uniform by European and American military and naval officers. In practice, it was worn by most generals and staff officers, and it survived as a widely worn full-dress headdress until at least World War I. This particular example sports the distinctive insignia of a lieutenant of the Continental Navy.

This hat is a unique version of Captain Ironsides' hat.

The lieutenant's hat is a reward given to the Sole Survivor by Ironsides when returning to the USS Constitution's new location after its take-off, with their promotion to the rank of "honorary lieutenant."