00000145
“Is honesty conceit? We're the next step in evolution. Through our Unity, the world will survive. Where is the conceit in that?”

The Lieutenant of the Master's Army[1] (sometimes called Lou Tenant,[2] or simply Lou[3]) is the right hand of the Master and the commander of the Mariposa Military Base.[Non-canon 2] He serves as the secondary antagonist of Fallout.

The Lieutenant is the model super mutant, being faster, tougher, and more intelligent than standard humans. He was the strongest of his batch, capable of withstanding the regimen of the FEV transformation without losing his intellect and skills (possibly even receiving an increase). His transformation created a sense of religious awe in him, focused on the Master and the Unity. He became his most devoted follower, supporting his master's ideals and firmly believing that the super mutants shall inherit the earth. For his devotion, he was rewarded with the highest position in the army, cybernetic implants, and personalized equipment.[4][5][Non-canon 2] The Lieutenant is unlike any other super mutant in this aspect: He bears the pauldrons of what apparently is power armor, has an eye prosthetic[6] and cerebral implants. [citation needed]

In terms of personality, the Lieutenant is further unlike any other mutant. Soft-spoken, urbane, and well-read, his firm belief in the superiority of super mutants borders on conceit. Yet he believes it is simple honesty, for the super mutants are truly better adapted to the demands of the post-nuclear world.[7][8][Non-canon 2]

Yet for all his intelligence and refinement, there are darker sides to the Lieutenant's personality. Though he considers torture crass, he finds it oddly satisfying. Unlike regular sadists, he does not employ it needlessly, especially if he can obtain the knowledge through normal coercion.[9][Non-canon 2]

The Lieutenant appears as a talking head in Fallout, and in the intro of Fallout 2. He is mentioned in the Fallout: New Vegas add-on Dead Money,[11] and the Fallout Bible.

According to Chris Avellone, the Lieutenant potentially became more intelligent after his FEV treatment.[Non-canon 3] 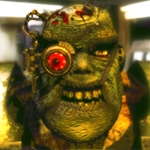 The Lieutenant's headshot from the Fallout GOG Extra's pack.

Lieutenant on the screen behind the captive Vault Dweller