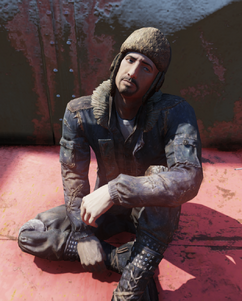 Liebowitz is a man taking refuge on the roof of the Jar Toss booth at the Tyler County Fairgrounds.

Described by Mort as a special "scrapper," Liebowitz made his home on top of a fair stall so that he could find some peace and quiet, believing that the Scorched below him would ward off any unwanted visitors. At some point, he interacted with Mort while the ghoul was exploring the area. Liebowitz bragged about knowing how to infiltrate WV Lumber Co. The way he knows of turns out just to be a few Stealth Boys that he believes actually send the user to the "astral plane". While he seems to not fully understand the function of a Stealth Boy, he's still cognizant enough to know that he is not agile enough to fully take advantage of the stealth boys.

If Liebowitz is asked about his backstory, he will claim that he was a science experiment that broke out of a government lab, deciding whether to use his "powers" for good or evil.

Upon first meeting Liebowitz, the player character can rob him with 4 Strength. He will give up alcohol, a junk item and a scant amount of ammunition. If he is robbed before the rest of his dialogue is exhausted, he will refuse to say anything about his story or Appalachia.

Liebowitz appears only in Fallout 76, introduced in the Wastelanders update.

Retrieved from "https://fallout.fandom.com/wiki/Liebowitz?oldid=3503449"
Community content is available under CC-BY-SA unless otherwise noted.