Libertalia is a location in the Commonwealth in 2287.[1]

After the death of General Becker in 2282, the destroyed dockyard of Libertalia was settled by a group of former Minutemen led by Wire. Initially, he tried to enforce the Minutemen way of helping other settlers in exchange for caps and food, but after a while, their food supplies reached dangerous lows. This resulted in two of Wire's best men raiding caravans. After Wire discovered the actions of his men, he had them executed. Eventually, Wire himself gave in to the raider lifestyle after caravans repeatedly stiffed his men on their escort jobs. Afterwards, Wire seems to begrudgingly accept that he must do what it takes for he and his men to survive, but notes in his last terminal entry that his former leaders would be sickened by his actions and that he no longer feels like making entries.

Libertalia eventually fell under the control of a synth named Gabriel at the start of Synth Retention.

Libertalia is a raider settlement made up of destroyed watercraft linked by wooden bridges. At its center is a capsized supertanker with its stern pointing straight up; the uppermost level - where a Master-level computer terminal guards an otherwise-inaccessible safe - is accessible via a ladder in the Captain's cabin.

Libertalia appears only in Fallout 4.

Libertalia is a reference to an alleged 17th century "pirate utopia" of the same name, founded by the notorious British pirate Henry Avery in northeastern Madagascar. The settlement was first alluded to in the 1724 book A General History of the Pyrates, though modern historians generally agree the location was fictional. 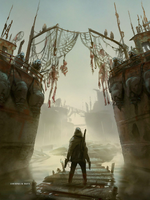 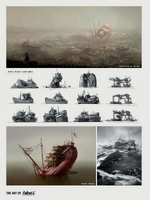 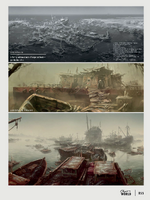 Retrieved from "https://fallout.fandom.com/wiki/Libertalia?oldid=3129266"
Community content is available under CC-BY-SA unless otherwise noted.