I Am Become Death
Invisible Ties

Fallout 76
“The Liberator robot was deployed by air onto American soil in the days leading up to the Great War. Its purpose was to inspire invading Chinese troops and spread Communist propaganda.”— Survival Guide

Liberators are robots found in Appalachia.

Liberators were small pre-War drones used by the People's Liberation Army. These military infiltration and attack robots were weak and ineffective, and became a joke among soldiers who were forced to waste ammunition on them.[1]

A team of researchers at the covert Fujiniya Intelligence Base in Appalachia decided to improve the design. The inferior Liberator prototype was revamped in numerous ways. The new Liberator series (designated Mark 0 – V) had an intimidating paint job and a set of speakers designed to spout propaganda. These propaganda messages would boost the morale of friendly forces while sapping that of their foes. The spontaneous detonation caused by capture avoidance systems was resolved in the new model, alongside a large number of improvements to its weapons systems. The low-powered laser that maimed instead of killing targets was replaced with a high-powered version, while an additional spinning blade was added to give it an edge in melee engagements. Attempts to provide it with deployment capability, allowing it to attack and deploy as a mobile turret on any surface, were postponed until the next version, the Mark VI.[1]

The new-model liberators were inexpensive to manufacture and easy to deploy via the facility's large launch bays disguised as smokestacks. The design was submitted to party leadership as a proposal for use in vanguard forces for the invasion of the contiguous United States. The improved bot was accepted, with additional funding provided for further covert field testing in Appalachia and the establishment of an automated factory at Fujiniya. They were deployed by air across the United States, but the Great War broke out before any invasion occurred.[2] After the Great War, the Enclave seized control of the facility, eliminated the holdouts, and secured the technology.[3]

President Thomas Eckhart later deliberately unleashed them on Appalachia, in an attempt to trick the DEFCON system into raising the alert status.[4] By 2102, many Liberators continued to function across Appalachia. They were used to spread Chinese propaganda, which can be looted from their inventories,[5] and broadcast motivational phrases. The short exclamations uttered by Liberators are in Mandarin and difficult to understand due to the high degree of audio distortion. Many of them are motivational, like "we must not stop," or "revolution is a must."[6]

These robots were designed to be dropped from aircraft, after which, they would autonomously attack any non-Chinese units they found[7], using rudimentary onboard weapons and IFF modules. The Liberator shell is optimized for air delivery and protects its internals from damage.[8] Liberators are designed to operate in swarms, networked together. They ping each other whenever they see something interesting leaving a small security loophole. This security loophole can be exploited by engineers familiar with Chinese technology to track down different pieces of Chinese tech.[9][10]

A Liberator is shaped like an artillery shell, with four panels around the sides that can be extended outward from the main body and used as legs for movement. The top end of the Liberator conceals four blades that allow it to perform slashing attacks or glide short distances, crashing into its targets. The Liberator chassis is painted two tones of blue with a red star-emblazoned around the machine's eye. The body is labeled "醉龍尖" meaning "drunken dragon point," a reference to the machines' erratic flying attack and extendable hidden spike.

Its eye is capable of firing a weak laser and it often vocalizes in Chinese when attacking. A Liberator can also fly into the air and pull its legs in, lunging at an enemy to attack with its central spike and the spinning blades hidden in its chassis.

Liberators are fragile enemies that pose little threat. However, they are small and fast, which makes them stealthy and hard to target. They can attack at range with their laser or close in on a target, jump up and slice with the blades concealed in their chassis. Their short height makes it easier for them to evade detection, though they cannot attack enemies that are behind even moderately sized obstacles. Liberators are usually encountered in groups. And in some locations like the Fujiniya Intelligence Base, the can lie in a dormant state to appear as though they are deactivated to ambush unsuspecting targets and catch them off guard.

Liberators share a single model and there is no meaningful difference in gameplay attributes between them, beyond increased health pools and damage dealt.

They only go up to Mark V, but designs for a Mark VI were created at Fujiniya Intelligence Base. These were never put into production, but they were going to replace the Mark V and solve numerous problems that plagued the older models.[1]

Liberators appear only in Fallout 76.

Liberators can occasionally be seen flying high up in the sky. When killed, they may not fall down.[verified] 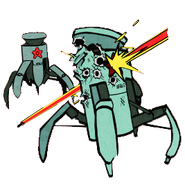 A pair of Liberators, as shown on the Taking One for the Team perk card 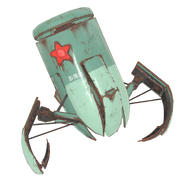 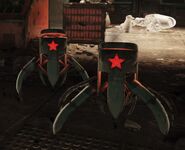