The Institute
The Railroad 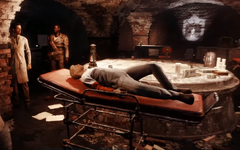 Liam Binet in the Railroad HQ

Liam Binet (also known as Patriot, username Binet.L[1]) is a scientist working for the Institute in 2281. Unbeknown to them, Binet serves as the primary link between the operatives of the clandestine organization known as the Railroad and the synths they seek to free.

Without the knowledge of his colleagues, this young mind shepherds gen-3 synths from the Institute out to the surface, with hopes that someone will answer his message and escort these fugitives to safety, away from the wrath of coursers and synth reclamation squads. Liam eventually becomes aware of the fact that he is instrumental to the success of the Railroad in the Commonwealth.

In 2283,[2] he, under the codename "Patriot," establishes communication with the outside world. An individual named Tinker Tom takes the responsibility of maintaining contact with Patriot. Patriot from then served the Railroad as an informant and contact for gen-3 synths being forwarded out of the Institute, using his position as a scientist to help them escape to the surface through weak points in the security of the organization.

Patriot has proven vital to the success of the Railroad's cause in the region, yet he has been kept in the dark about his allegiance to them in order to prevent his position from being compromised. For this reason, he will be surprised when the revelation comes around that he has been helping the Railroad free synths.

A pacifist by nature, Liam is opposed to violent methods, even if it is in the name of freeing synths. He is intolerant of armed conflicts and seeks no part of the upcoming synth rebellion against the Institute's directorate, backed by the Railroad. During the climax of the War of the Commonwealth if the Sole Survivor sides with the Railroad, Binet, severely devastated by the fighting, takes his own life, a choice fueled by the hopelessness of the situation.

Following the armistice, the Railroad recovers Patriot's body and lays him to rest in the Old North Church. Desdemona tells everyone that Liam's death in the line of freeing synths should be honored, but she secretly presents the Sole Survivor with Patriot's suicide letter. In the letter, Liam expresses his dismay and anger at the Sole Survivor for using him in their plot to violently overthrow the Institute, as well as the deaths of all his friends and family, lost either in the violence of the uprising or in the harsh environment of the wasteland after being forced out into the world.

If engaged in conversation after siding with the Institute, he will inquire about the progress of the plan to free the thirteen synths, to which the Sole Survivor can say they aren't going forward with it.

Liam Binet appears only in Fallout 4.

Retrieved from "https://fallout.fandom.com/wiki/Liam_Binet?oldid=3179616"
Community content is available under CC-BY-SA unless otherwise noted.