Rocco and Lev's deal
To Meg and Crater freaks

Full Throttle
“I know this because you are weak, ineffective leader. You could not lead gang out of wet paper bag. Too weak. Too stupid. Too cowardly.”— Lev to Meg Groberg, Rocco and Lev's deal

Lev is a Russian raider in Appalachia.

Lev is a former Soviet mobster that came to America from Russia before the Great War. He enjoyed the change in locale and likes the United States - or what is left of it - as Americans are, in his view, soft and make for easy prey.[1]

Becoming a raider came easy for him, and Lev eventually threw his lot in with Meg Groberg and the Crater raiders. In fact, he considers himself to be Meg's second-in-command and behaves in an arrogant, lofty manner towards other raiders.[2] While Lev was fighting super mutants with his fists, he crossed paths with Surge and offered her a place in their group.

In reality, Meg has come into conflict with Lev frequently. When Lev started making unwanted passes at Barb, her brother told Meg. Meg then threatened Lev's "manhood" with a shotgun in order to make him stop.[3]

Lev appears in Fallout 76, introduced in the Wastelanders update. 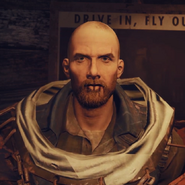 Lev during From Russia With Lev