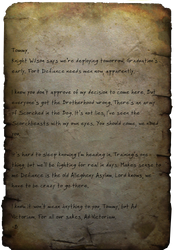 Letter to Tommy is a paper note in Fallout 76.

This note can be found on a table in the Camp Venture command center building during Defiance Has Fallen.

I know you don't approve of my decision to come here. But everyone's got the Brotherhood wrong. There's an army of Scorched in the Bog. It's not lies, I've seen the Scorchbeasts with my own eyes. You should come, we need you.

It's hard to sleep knowing I'm heading in. Training's one thing, but we'll be fighting for real in days. Makes sense to me Defiance is the old Allegheny Asylum. Lord knows, we have to be crazy to go there.

Retrieved from "https://fallout.fandom.com/wiki/Letter_to_Tommy?oldid=3027595"
Community content is available under CC-BY-SA unless otherwise noted.