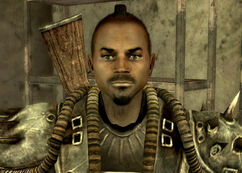 “You're a sharp one. We're from Paradise Falls. We're hunting runaway slaves. Have you seen any?”

Leroy Walker is a slaver from Paradise Falls in 2277.

Leroy, a believer in the rule of the strong over the weak, is unique among other slavers, in that he does not concern himself with the profits made from slavery. Instead, he believes that the human transactions are simply natural law being carried.[1][2]

He can usually be found in the operations office on the first floor; go left while facing the steps into the memorial itself.

Supplying Walker with one artifact will allow the Lone Wanderer access to the memorial.[5][6]

Leroy Walker appears only in Fallout 3.

The character is a reference to LeRoy Pope Walker, the first Confederate States Secretary of War. Walker issued the orders for firing upon Fort Sumter, which began the American Civil War.