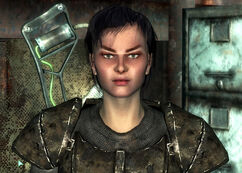 Rivet City (outside, in the "stairway" up to the bridge)

“At first it was a win-win. They paid us and shared their technology with us. The spoils of their war with the Enclave were particularly enticing. However, with all the recent attacks, the "extra" resources end up being used just protecting the caravans from being exterminated.”

Officer Lepelletier is a member of Rivet City security in 2277.

A Rivet City security force team member who, through hard work and dedication, has landed herself the unfortunate position of being in charge of the Water Caravan Escort detail. Rivet City has contracted out with the Brotherhood of Steel to help escort water caravans to their destination, in exchange for getting money and technology from the Brotherhood. Officer Lepelletier has a makeshift office set up outside Rivet City where she handles coordinating the caravans and security details. There is usually a small contigent of caravan drivers, brahmin, and disgruntled Rivet City guards buzzing around the bridge gangplank building. Lepelletier's caravans have been getting hijacked more regularly, and she suspects something organized is going on.[1]

Officer Lepelletier appears only in the Fallout 3 add-on Broken Steel.

Retrieved from "https://fallout.fandom.com/wiki/Lepelletier?oldid=3106757"
Community content is available under CC-BY-SA unless otherwise noted.