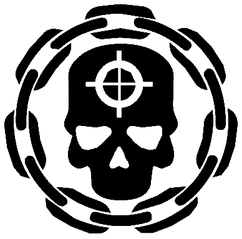 Leon Ames was a survivor of the Great War and a co-founder of the initial settlement at the West Everett Estates in 2078.

Leon was returning from vacation with his brother Lance and his sister-in-law Janet when the nuclear bombs dropped. They had to make their way back to the West Everett Estates on foot. Once there, he began building a wall around the neighborhood, with the help of his brother and Wayne Tournquist. During a scavenging run, he mistakenly revealed the location of their home to a questionable group of individuals. These same men later came and took over the estates, killing most of the residents. Leon, however, joined them out of fear, while the other raiders planned to later use him as a meat shield.[1]

Leon Ames is mentioned only in Fallout 4.

Retrieved from "https://fallout.fandom.com/wiki/Leon_Ames?oldid=3249707"
Community content is available under CC-BY-SA unless otherwise noted.