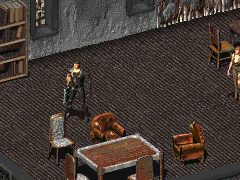 “Each one of these marks is for a past attempt on Hightower's life. I bagged each and every one of them.”

Leon is Daren Hightower's personal bodyguard in the Heights district of the Hub in 2161.

He decides who does and does not see Mr. Hightower.

Leon will gruffly converse with the Vault Dweller, but is not exactly useful for information. If Mr. Hightower yells for the guards, the Vault Dweller is personally kicked out by Leon. His only function is to be the deadliest guard Hightower has.

He says he has five marks on his 14mm pistol, supposedly representing five people who wanted to kill Mr. Hightower that he killed.

Leon appears only in Fallout.

Retrieved from "https://fallout.fandom.com/wiki/Leon?oldid=3363761"
Community content is available under CC-BY-SA unless otherwise noted.