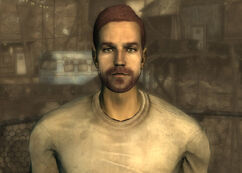 “Aren't you curious? You know what they say about curiosity, don't you?”

Leo is the most outspoken of the two Stahl brothers. He is the "people person" of the restaurant and loves to talk to the customers. He spent some time on the caravan lines in his teens and has traveled to a few places around the wasteland. It was during this time that he picked up his addiction to jet, although he has managed to conceal his addiction from everyone in town, including his own brother and sister (although it is obvious that Mister Burke and Colin Moriarty know). [1]

During the day he sells drinks in the Brass Lantern and wanders the town, while at night he satisfies his chem addiction at the water processing plant. Together with his brother Andy Stahl and sister Jenny Stahl, they run the local diner - the Brass Lantern.

Colin Moriarty writes in his personal computer about Leo Stahl: "Never trust a junkie. That's what I've learned trying to deal with this piece of work. He wanders in here higher than a bird in flight and tried to make it with Nova. She slapped him silly after he didn't want to pay, the good girl. I almost kicked him out myself, but he staggered out of here. That guy may just be the straw I need to break Andy's back."

* Only if Jenny Stahl is also dead.

Leo Stahl appears only in Fallout 3.

Leo is one of the NPCs who are known to go missing. See Recovering missing NPC in Fallout 3 to learn how to resolve the issue. [verified]

Retrieved from "https://fallout.fandom.com/wiki/Leo_Stahl?oldid=3387575"
Community content is available under CC-BY-SA unless otherwise noted.