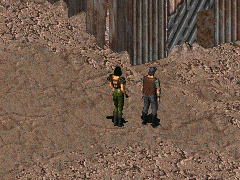 Lenore in the Fallout demo

Lenore is a character in Junktown in 2161.

Lenore is Phil's spouse, who lives with him in their house near Gizmo's Casino. When the couple found themselves ejected from their house by a vicious beast, she keeps making fun of Phil for continuously running away from a relatively small threat.

Aside from appearing in Fallout itself, Lenore also appears in the Fallout demo as an unnamed peasant of Scrapheap, with the same quest as in the final game.

Retrieved from "https://fallout.fandom.com/wiki/Lenore?oldid=3072073"
Community content is available under CC-BY-SA unless otherwise noted.