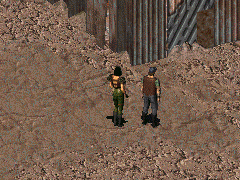 Lenore in the Fallout demo

Lenore is a character in Junktown in 2161.

Lenore is Phil's spouse, who lives with him in their house near Gizmo's Casino. When the couple found themselves ejected from their house by a vicious beast, she keeps making fun of Phil for continuously running away from a relatively small threat.

Her name only appears in combat when hitting her. Otherwise, she is listed as a peasant.

Lenore appears in Fallout and the Fallout Demo.

Retrieved from "https://fallout.fandom.com/wiki/Lenore?oldid=3363760"
Community content is available under CC-BY-SA unless otherwise noted.