Wendy the Welder
“This is a choice that can never be undone. So tell me... do you support the growth and outreach of the Appalachian Brotherhood of Steel, under the command of Paladin Leila Rahmani? Or are you beholden to the fearful and outdated mandates of the Elders, to whom our very own Knight Daniel Shin vows his loyalty?”

Paladin Leila Rahmani is the leader of the Brotherhood First Expeditionary Force in Appalachia, who were sent on a mission to re-establish contact with Elizabeth Taggerdy's Appalachian Brotherhood. Rahmani's Brotherhood comes from Lost Hills. As her Brotherhood branch is new in Appalachia, she assigns multiple missions to show the organization's good will so other factions will cooperate with them.

Rahmani is one of the two major Brotherhood leaders of the First Expeditionary Force, the other being Knight Daniel Shin who now acts as second-in-command after the death of Alan Connors. Known for being aggressive and daring,[2] she enters frequent arguments and disagreements with Shin.

In contrast to Shin, Rahmani secretly hopes to transform their branch into an independent, altruistic Brotherhood with a higher focus on peacekeeping. For example, instead of merely collecting technology, she wishes to teach people how to use it to better their lives. Rahmani views the control of the Brotherhood's council of Elders to be a hindrance in her ideals of helping humanity, desiring them to take no part of her branch. Rahmani expresses hesitation to establish contact, as she fears it would result in having their titles stripped and their influence rendered illegitimate, due a a past incident in which many innocent lives were lost.[3] Despite the fact that re-establishing contact was an order in and of itself, Rahmani believes that their Brotherhood force could continue on as a sanctioned offshoot nonetheless, able to spread "authority and goodwill across the nation."[3]

Pre-War, Rahmani served in the National Guard, with a personal mission to help those that are less fortunate or otherwise cannot help themselves.[4] She was dispatched near Mariposa Military Base at the time of the Great War, learning of the formation of the Brotherhood of Steel, as well as easily transitioning into the group due to her prior military service.[5] Rahmani was close to Alan Connors as a friend; they survived the bombs together and joined the Brotherhood with each other.[6] She had also known Elizabeth Taggerdy since the latter was a lieutenant.[7]

During that time, she earned the characteristics of being a caring, yet bold leader, renowned for decisive action and inventive tactics. Although criticized by leadership, she has managed to attain a highly successful record, as well as being generally approachable by the lower-ranked members. After contact was lost with the Appalachian chapter of the Brotherhood, she was granted command of an expedition, consisting of four other members, by the Council of Elders to contact or otherwise find them.[8]

In response, Maxson issued a personal plea to Rahmani, imploring her to follow protocol despite any misgivings she had about her mission. Though Rahmani had not always seen eye-to-eye with Maxson, the two were close and he believed she was still loyal to the values of the Brotherhood.[9]

Over the course of their months-long expedition, Rahmani and the rest of the First Expeditionary Force encountered a settlement under threat of raiders who were stealing their supplies. Rahmani decided to stay and fight, while Shin decided to equip them with government-issue weaponry they had found in a bunker which violated the Brotherhood's protocol to safeguard weapons instead of distribute them. However, the weapons proved useless against the raider force when the raiders were able to steal them. The settlement was wiped out and Alan Connors lost his life saving Shin, with only two survivors of the town: Marcia and Maximo Leone. This incident would set off a division between Rahmani and Shin, with Shin wanting himself and Rahmani to stand trial with the Council of Elders.[10] Shin felt heavy guilt for the consequences of his actions, although Rahmani believed he needed to forgive himself as he was ultimately trying to help. Marcia blamed both Rahmani's and Shin's actions for the tragedy, feeling no one should have retaliated against the raiders in the first place.[11]

While Russell Dorsey was fortifying the ATLAS Observatory, her voice could be heard across the region, becoming more audible with each passing week.[12]

Upon arriving at ATLAS after months of walking, she and her two remaining members, Knight Shin and Scribe Valdez, had encountered and recruited a number of initiates and Brotherhood hopefuls, seeking to officially join the organization. Dorsey was also made into an initiate upon their arrival.[13]

After arrival, Rahmani, Valdez and Shin began to re-establish communication with Lost Hills as ordered. They also took the inoculation against the Scorched, developed by the dwellers of Vault 76.[14]

Over the course of their reinforcing of Fort Atlas and establishing themselves in the region, Shin and Rahmani came into multiple conflicts of personality through various matters, the most important of which is the resurgence of government rocket launchers and other weaponry, used in the same incident that Shin believes he and Rahmani should be taken back to Lost Hills and tried for. During a mission to re-establish contact with the Brotherhood in California by using a long-range transmitter, Rahmani tries to persuade the Vault Dweller to her side, asking them to destroy the transmitter with her to help create a Brotherhood she strives for, free from the control of the Elders. She reveals her intentions of severing ties with the main body of the Brotherhood of Steel and seeking to form her own, independent Appalachian Chapter of the Brotherhood of Steel.[15][16] Whether or not the Vault Dweller participates, Rahmani destroys it regardless, angering Shin who no longer deems her part of the Brotherhood. However, before they can continue debating any further, they receive word of a super mutant attack at Fort Atlas, which caused temporary need of unity from both Rahmani and Shin.[17] Back at the base, Rahmani's actions also shock Valdez, who is annoyed another issue has arose between Rahmani and Shin. The super mutant attack is dealt with.

Nevertheless, a year later in 2104, Rahmani and Shin are still at odds over their Brotherhood's primary mission: Protect the people in Appalachia, or secure all manner of pre-War tech to prevent it from causing another apocalypse like the Great War. They soon discover that the super mutant attack on Fort Atlas was not coincidental. Dr. Edgar Blackburn, one of the people who came to Fort Atlas earlier looking for help from the Brotherhood, only to be turned away by Shin, had been kidnapping people from all over Appalachia to use as test subjects in his research to improve the Forced Evolutionary Virus.

Rahmani decided to interview the boss of the Blue Ridge Caravan Company, Joanna Mayfield, about the disappearances. After being guided by Aries, Rahmani learns that Blackburn was among several of the Blue Ridge's caravans, especially one that holed up in the Harpers Ferry tunnel due to a radstorm. After Blackburn was captured during his work inside Vault 96, Rahmani and Shin take him to the West Tek research center, where his fellow scientists Farha, Jain and Nellie Wright were putting the final touches on the FEV to release into the water and air, which would lead to more people being turned into super mutants once exposed, a worst-case scenario even worse than Huntersville. In a bid to prove their research is for the betterment of humanity in the wasteland, Blackburn willingly volunteers to be exposed to the virus himself, but a miscalculation or malfunction in the process causes Blackburn to be turned into a violent super mutant behemoth, forcing Rahmani and Shin to kill him.

After, Shin erupts at Rahmani, scolding her that something like this was just what the elders wanted to prevent: People trying to play God with science. Though Rahmani agrees with him on that, when they confront Farha, Jain and Nellie, they plead for mercy and ask that their lives be spared, considering that their research is invaluable to the wasteland with the loss of schools and universities because of the Great War and the decay that followed. Though Rahmani wants to spare them because of how valuable human life is nowadays, Shin is adamant that they be slain after seeing firsthand just how dangerous their knowledge is should it fall into the wrong hands if they are allowed to live. In the end, the conflict over Blackburn's associates results in Rahmani and Shin parting ways, unable to reach an agreement, with one either being killed or allowed to return to Maxson, while the other takes command of the Brotherhood to lead them on their new duty to Appalachia.

Leila Rahmani appears only in Fallout 76. Her voice was first heard in the Brotherhood broadcast, introduced in The Legendary Run, and she made her first full appearance in the Steel Dawn update. Her character was additionally expanded upon in the Steel Reign update.

Rahmani during a radstorm in the Steel Dawn trailer

Shin and Rahmani in the Steel Reign trailer

Rahmani interviewing Joanna Mayfield during Out of the Blue

Rahmani during Out of the Blue 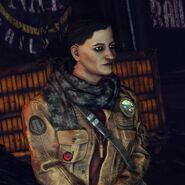 Rahmani during Out of the Blue

Rahmani with Aries in the Harpers Ferry tunnel

Rahmani's body if she is murdered during The Catalyst 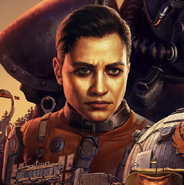 Rahmani on an artwork for Steel Dawn, wearing a Brotherhood knight suit

Rahmani on an artwork for Steel Reign, equipped with a plasma War glaive 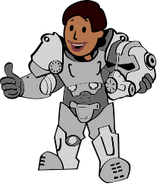 The quest icon that shows during the Steel Reign questline, showing Rahmani and Shin divided 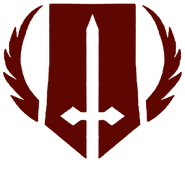