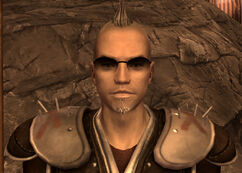 “I am harsh on the children, but they will become excellent legionaries, I'm quite proud of them.”

The Legionary instructor is a Caesar's Legion trainer, living in the Mojave Wasteland in 2281. His location is in front of the Fort's drawbridge, training some Legion children.

The Legionary instructor has been assigned to work hard on the Legion children so that they are adequately prepared and have enough stamina to perform well in battle later on in life. In order to increase performance and obedience, he uses threats such as throwing them off a cliff for not meeting expectations, or by telling them things such as him having seen crippled slaves run faster than them.

When engaging in some conversation, he tells the Courier that although he is very harsh on the children, he also mentions that they will make excellent legionaries, and is also "quite proud of them."

He shares his role of training new recruits with his NCR Army counterpart: the cut drill sergeant.

The Legionary instructor appears only in Fallout: New Vegas.

Retrieved from "https://fallout.fandom.com/wiki/Legionary_instructor?oldid=3124450"
Community content is available under CC-BY-SA unless otherwise noted.