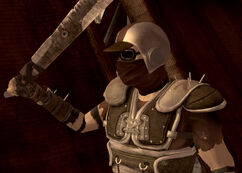 Legionary blacksmiths are in charge of maintaining and forging the Legion's weapons.

One of the blacksmiths is located near some tents, just after passing the drawbridge when entering the Fort. He is sharpening a machete.

The other blacksmith is located further within the camp, behind Caesar's tent heading down a slope to the left side, near the weather monitoring station. He is hammering down on some small steel beams. In addition, there are several blacksmiths in Legate Lanius' camp.

The machetes that the blacksmiths hold appear to be much larger in length than other machetes found in the wasteland.

The second blacksmith, doing some hammering

Without his helmet
Add an image to this gallery
Retrieved from "https://fallout.fandom.com/wiki/Legionary_blacksmith?oldid=3323188"
Community content is available under CC-BY-SA unless otherwise noted.