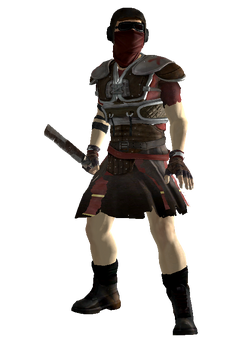 “The Caesar has marked you for death, and the Legion obeys! Ready yourself for battle!”— Legionary assassin, before attacking the Courier

Legionary assassins are high-end assassins living in the Mojave Wasteland in 2281. They work for Caesar's Legion.

Legionary assassins are small groups of four elite killers for Caesar, usually led by a Decanus, a Praetorian guard or a Centurion, dispatched to eliminate the Legion's enemies.

First type of group is composed of:

The second type of group is for eliminating Caesar's greater enemies, composed of:

The last type of group is for Caesar's greatest, most hated enemies, composed of:

During these assassination missions, Praetorian Guards are allowed to use firearms in the place of their unarmed weapons.

Legionary assassins typically attack in 4-man groups; a Recruit-Prime-Veteran-Decanus, a Legion vexillarius, one Veteran legionary and after:

Legionary assassins may also appear after aiding the Legion's enemies, namely the NCR, by successfully completing the quests Three-Card Bounty, I Put a Spell on You, I Don't Hurt Anymore, or any other quest that improves the reputation of the player with the NCR.

They will have weapons and armor depending on your standing with Caesar's Legion and your level. They can range from simple 9mm pistols, caravan shotguns and machetes to 12.7mm pistols and sub-machine guns, assault and Marksman carbines, brush guns, thermic lances and super sledges.

As of patch 1.4.0.525, Legionary assassins level with the player, up to level 45. At higher levels this gives them very high health on par with a non-player character companion. Additionally, the Praetorian and Veteran assassin may be equipped with Legion centurion armor instead, making them all the more difficult to kill.

Add an image to this gallery
Retrieved from "https://fallout.fandom.com/wiki/Legionary_assassin?oldid=2709728"
Community content is available under CC-BY-SA unless otherwise noted.