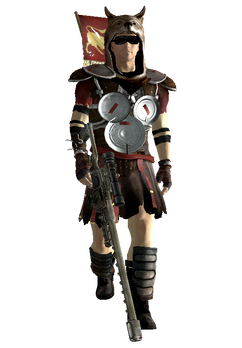 “Not commonly seen on the front lines, the vexillarius is a standard-bearer for Caesar's Legion. Their presence on the battlefield inspires legionaries to fight to the death for the glory of Caesar.”— Loading screen

Legion vexillarii are Caesar's Legion members living in the Mojave Wasteland in 2281.

In Ancient Rome, the Eagle represented the Soul of a Legion; its loss in battle was a catastrophic blow to both the morale of the Legion and the Army as a whole. There is believed to be some evidence of Legions being disbanded and the soldiers being assigned to other Legions at the loss of an Eagle.

The presence of the Eagle would inspire the Legionaries to fight to the death rather than suffer the disgrace of losing an Eagle. Julius Caesar's Invasion of Britain was supposedly begun when the Standard Bearer of one of the 10th Legion jumped over the railing of one of the Invasion Craft and advanced towards the Defending Britons, after the Legionaries failed to advance due to the Briton's attacks from the shallows and the distance to shore.

In-game, the vexillarii are described as having the same effect. However, they seem rarer than their ancient counterparts; possibly they represent the Eagle Bearers (Aquilifer) rather than the standard-bearers. Like Praetorian guards and Legionary assassins, the vexillarii are elite units with very high health and combat skill. Like Praetorians, they have 10% Damage Resistance.

Vexillarius is the Latin word for "standard bearer."

Concept art, Behind the Bright Lights & Big City
Add an image to this gallery
Retrieved from "https://fallout.fandom.com/wiki/Legion_vexillarius?oldid=3307327"
Community content is available under CC-BY-SA unless otherwise noted.