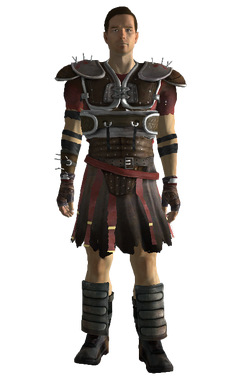 Compared to Legion prime armor, veteran armor has additional armor pads on the lower legs, as well as several sharp nails sticking out of the shoulder pads and the leather wrappings on the right arm.

The veteran helmet is comprised of several different pieces adjoined together: a baseball cap with an aluminum helmet, goggles for the eyes, and a face wrap. 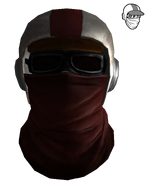 Concept art, Behind the Bright Lights & Big City
Add a photo to this gallery
Retrieved from "https://fallout.fandom.com/wiki/Legion_veteran_armor?oldid=3307321"
Community content is available under CC-BY-SA unless otherwise noted.