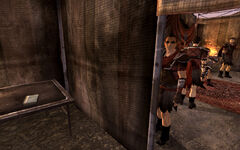 The Legion slave ledger is a quest item and a note in Fallout: New Vegas.

It is located on a table in the left hand side of Caesar's tent, in the right hand corner by some empty metal shelves.

This ledger is an extensive record of the Legion's prior dealings with tribal societies it has encountered in its expansion.

Of particular interest is the fate of the Twisted Hair tribe of Arizona, who formed an alliance with Caesar to serve as his army's scouts during the conquest of that region. Once the Arizona wastes were pacified, the Legion turned on its erstwhile allies, stripped them of their tribal identity, and forced them into slavery. Those who resisted were crucified along the remains of Interstate 40.

Once the ledger is picked up, and even if it is used to convince Regis that an alliance with Caesars Legion is a bad idea, it will be forever marked as a quest item and cannot be removed from the player's inventory. [verified]