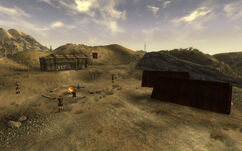 Booted
I Forgot to Remember to Forget

“Yeah, a bunch of those Legion fucks dragged them off right away. They were headed east, if you're feeling heroic.”— Boxcars

The Legion raid camp is a location serving as one of Caesar's Legion's forward assault camps in 2281. It is located northeast of Wolfhorn ranch, midway between Walking Box Cavern and broc flower cave.

While many of the Legion responsible for the razing of Nipton headed back to Cottonwood Cove, a few remained to pillage the area and take prisoners.

The camp consists of two levels created by the natural landmasses. There is a storage tent and two red tents on the upper level, each containing four bed rolls and two footlockers. Taking items from footlockers results in negative Karma. On the lower level, there is one more tent, which may have a few Legionaries sleeping inside. Each level has a campfire, and in all, there will be up to five legionaries residing at the camp.

A patrol of two to four legionaries walk a perimeter around the camp. NCR patrols sometimes travel near the raid camp and will engage in firefights with the Legion patrol. There are also two Powder Gangers being held hostage at the camp as part of the quest Booted. Sometimes, the camp will be attacked by two or more night stalkers. The night stalkers may kill everyone in the camp, making the completion of Booted impossible.

The camp and the area around it is one of the few places where legionaries respawn.

The Legion raid camp appears only in Fallout: New Vegas.

Lottery ticket on the ground

Second lottery ticket
Add an image to this gallery
Retrieved from "https://fallout.fandom.com/wiki/Legion_raid_camp?oldid=3260670"
Community content is available under CC-BY-SA unless otherwise noted.