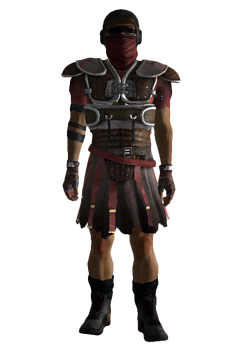 Legion prime armor is a set of armor in Fallout: New Vegas, used by prime legionaries.

Legion prime armor, made from scavenged sports equipment, has a Damage Threshold of 8 and can be repaired with any Legion armor. This armor is worn by soldiers in the Legion at the rank of prime legionary. The prime legionaries are Caesar's main frontline soldiers, better equipped and armored than recruit legionaries.

Compared to Legion recruit armor, prime armor has an extra armor band wrapped around the upper torso, as well as several red straps hanging from the belt. In addition, the matching prime helmet is a brown cap that is equipped with black protective goggles and a red bandanna is wrapped around the lower face. 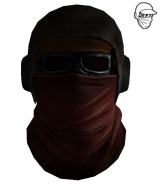