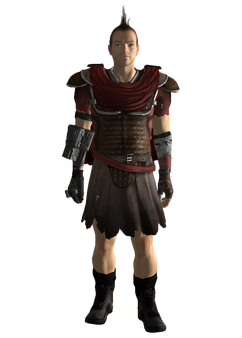 Legion praetorian armor is a piece of Legion armor in Fallout: New Vegas.

This armor has a Damage Threshold of 12 and can be repaired with any Legion armor. The protective elements of this armor appear to be made of a set of football shoulder pads (protecting the shoulders, neck and chest) and a baseball umpire or catcher's "vest" (protecting the rest of the torso and groin). It is similar to a suit of Legion recruit armor, with the addition of metal bracers on the forearms, as well as a short red cape worn down the back and a red cowl around the neck.

It is one of only two Legion armors which have a cloak, the other being centurion armor.

The name Praetorian refers to the ancient Roman praetorians, bodyguards of a general's tent (praetorium) and, in later centuries, of the emperors.