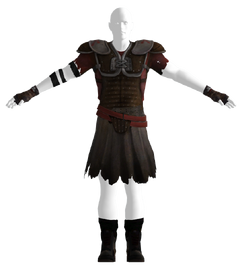 Legion explorer armor is an armor in Fallout: New Vegas.

This armor has a Damage Threshold of 4 and can be repaired with any Legion armor. It also acts as a Caesar's Legion disguise.

The explorer armor itself is supposed to be identical to the Legion recruit armor. The mesh itself is actually two copies of the recruit armor together in place, though slightly misaligned. This has lead to odd discoloration issues around the torso area and boots, as well as some facial glitches from talking non-player characters.