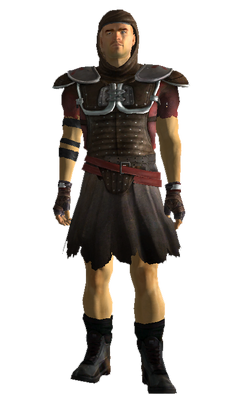 “If it isn't the courier who's done everything she can to defy the will of mighty Caesar!”

Legion explorers are the advance scouts and messengers of Caesar's Legion, operating in the Mojave Wasteland in 2281. They are easily distinguished by the cloth hoods they wear.

Legion explorers are tasked with surveying the lay of the land ahead of the primary Legion fighting force. They are also used as messengers for relaying communications between Legion outposts. Explorers are lightly armored and equipped, as their role in the Legion involves observation and speed rather than pure combat. Their Legion explorer armor provides only very modest protection, and they carry only a machete, a few throwing spears, and occasionally a hunting rifle or cowboy repeater.

Multiple Legion explorers can be found at Nelson and Cottonwood Cove, the Legion's two primary bases of operation west of the Colorado River. They can also be found at Caesar's stronghold, Fortification Hill.

Additionally, a handful of explorers can be found patrolling Cottonwood Cove, with one explorer stationed permanently at the entrance to the camp. The explorer will demand to know the Courier's business if spoken to. The Courier can either pass a Speech check claiming to be a trader, claim to be a friend of the Legion, or be let through with the Mark of Caesar. Unlike the explorers at Nelson, he will show less hostility towards the Courier when greeting them.

An explorer with a hunting rifle

Concept art, Behind the Bright Lights & Big City
Add a photo to this gallery
Retrieved from "https://fallout.fandom.com/wiki/Legion_explorer?oldid=3327084"
Community content is available under CC-BY-SA unless otherwise noted.
... more about "Legion explorer"
RDF feed
Has platform
PC +, Playstation 3 +  and Xbox 360 +