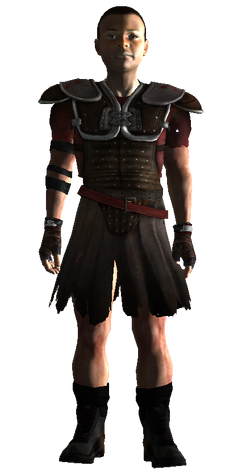 “One day I'll be part of the Praetorian Guard, you'll see.”

Legion children (simply called "child" in-game) are characters living in The Fort in 2281.

They are children trained by their instructor to become legionaries. They run up and down the hill leading to The Fort's entrance to get in shape for future fights.

They can't be engaged in conversation and only say a few generic lines.

Legion children appear in Fallout: New Vegas, and are mentioned by Ranger Andy.

Retrieved from "https://fallout.fandom.com/wiki/Legion_child?oldid=3107838"
Community content is available under CC-BY-SA unless otherwise noted.