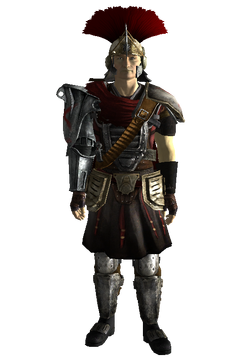 000EE483
“It is the armor of a centurion. You have the rare honor of beholding it unspattered by the blood of my inferiors.”— Aurelius of Phoenix

The Legion centurion armor and centurion helmet are two pieces of armor in Fallout: New Vegas.

The Legion centurion armor is by far the strongest suit of armor available to Caesar's Legion, with a full set of both armor and helmet providing a Damage Threshold of 23, only 1 less point than a full set of the famous NCR Ranger combat armor. The armor is composed of other pieces of armor taken from that of the wearer's defeated opponents in combat.

The parts appear to be:

When swinging one-handed melee weapons in first person, the camera glitches inside the armor. [verified] 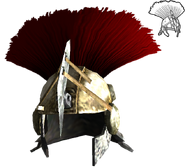