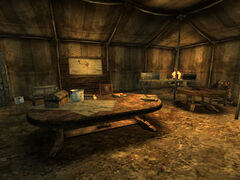 The Legate's war tent is a location in the Mojave Wasteland in 2281. Located inside the Legate's camp, it belongs to one of the final bosses of Fallout: New Vegas, Legate Lanius.

The tent is only accessible for a few seconds while the Courier receives the Veni, Vidi, Vici quest from Legate Lanius. The inside consists of a center table where maps of Hoover Dam lie. Another map is posted to the wall.

There are also two praetorian guards, many dead NCR troopers and dead slaves. There is also a live female slave, who is tied up in the corner of the tent. If the player character is sent to kill Legate Lanius in one of the final quests, the tent door will be locked with no way to enter.

The Legate's war tent appears only in Fallout: New Vegas. 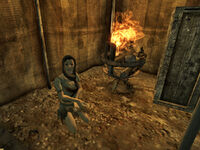