Veni, Vidi, Vici
Eureka!
All or Nothing
No Gods, No Masters

Fallout: New Vegas
“And just in time, as it turns out. The forces of Caesar's Legion are on the march, establishing a staging area east of the dam.”— Robert House

The Legate's camp is a location in the Mojave Wasteland in 2281. It is located east of Hoover Dam. It is surrounded by cliffs and mountains on all sides and is inaccessible for the majority of the game. The only way to enter the camp without using exploits is during the final leg of the main quest. Other than that, the camp remains inaccessible.

At the entrance of the camp, there are a few Praetorian guards. One is standing directly in front of the hill and two are in the small encampment to the left. On the right side of the entrance to the camp, there is a cage with Legion mongrels. The cage door can be sabotaged so that it will not open, however, the dogs inside can still be attacked. There are several Prime Legionaries armed with marksman carbines and power fists throughout the camp.

Up the hill is Legate Lanius. Approaching him will initiate conversation. On top of the hill stands the Legate's war tent. As the tent is locked from the inside (which is odd considering that it is a tent), there are no normal means of entry. Inside the tent, during the Veni, Vidi, Vici quest, is Lanius with a Praetorian guard on the right, and a slave sitting on the left. The Legate is torturing and mutilating NCR prisoners, as seen from the bodies on the table and floor.

The Legate's camp appears only in Fallout: New Vegas. 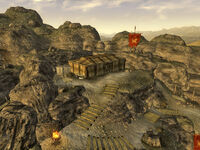