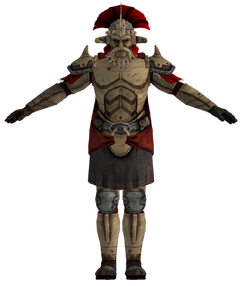 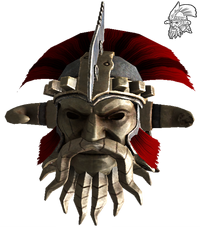 Legate's armor is a piece of armor worn by Legate Lanius.

The armor appears to be a full suit of heavy gauge steel and offers full body protection. It also has a cloak in excellent condition, but the armor itself bears numerous battle scars and the helmet is missing half of the left horn. The Legate's suit appears originally crafted in the style of Roman armor (the mask modeled after calvalry masks), in contrast to other Legion armor which consists of repurposed pre-War sports equipment. 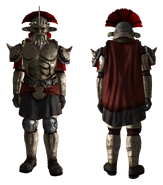 The Legate's armor (front and back view)

Concept art, Behind the Bright Lights & Big City
Add an image to this gallery
Retrieved from "https://fallout.fandom.com/wiki/Legate%27s_armor?oldid=3342709"
Community content is available under CC-BY-SA unless otherwise noted.