Caucasian
“I would sooner spit on the grave of my dead mother than let some Courier, 'walk-the-wasteland' fuck talk to me like that.”

General Lee Oliver is the commanding officer of the New California Republic Army in the Mojave Wasteland in 2281.

A career New California Republic Army soldier, General Lee Oliver is an outspoken supporter of President Aaron Kimball and his campaign of eastward expansion.[citation needed] As the commander of the republic's forces in the Mojave, he is responsible for the forces' overall strategy.

While preparing for the Second Battle of Hoover Dam, Robert House calls his efforts "tunnel vision," where he diverts few resources to rather pressing strategic issues.[1] While the Legion builds an increasingly strong foothold on the western bank of the Colorado River south of Hoover Dam, Lee recently left his administrative post at Camp McCarran to build up the garrison at the dam, and intends to confront the Legion en masse, attempting to destroy the enemy through attrition.[2] This strategy has earned him the defamatory moniker "General Wait-and-see" among many lower-ranking officers and soldiers, who generally don't think much of him, and believe that he got his post largely due to cronyism.[3][4] Craig Boone remarks that Oliver interfered with Colonel Hsu's career, stating that if it weren't for Oliver's relationship with the president, Hsu would have been a general already.[4]

Oliver holds a grudge against the NCR Rangers and Chief Hanlon, due to the role they played during the First Battle of Hoover Dam in 2277.[5][6] The strategic ingenuity of Hanlon's plan earned him widespread praise and popularity, obscuring Oliver's contributions.[citation needed] As a result, Oliver is determined to win the second battle entirely with his own methods, to the point of refusing to listen to Hanlon's input and jeopardizing Rangers in the field.[7]

Killing him might cause him to become "unconscious," but never getting back up, making it impossible for the player to loot his body. [verified] 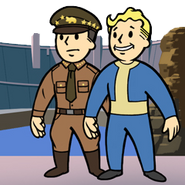 General Lee Oliver, being thrown from the dam by Yes-Man