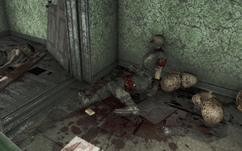 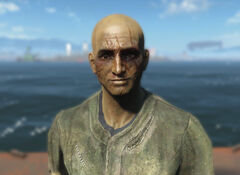 “Oh, hey momma. You looking for this?”— Lee's last words before being killed by the deathclaw

Sergeant Lee is a deceased human in the Museum of Witchcraft in 2287.

Sergeant Lee was a sergeant in the Gunners and was under the command of Major Jefferies. He and a group of gunners were hired by Wellingham to find a nest of deathclaw eggs. However, a deathclaw had followed them from Lynn Woods and killed him and his team. Near his corpse is his holotape and a pristine deathclaw egg which are part of The Devil's Due quest.

Sergeant Lee appears only in Fallout 4.

Retrieved from "https://fallout.fandom.com/wiki/Lee_(Fallout_4)?oldid=3122925"
Community content is available under CC-BY-SA unless otherwise noted.