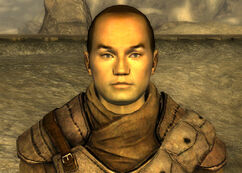 “Our goal's to take out their leader, some assbag named Eddie. With the ringleader gone, the rest will fold.”

Sergeant Lee is a soldier in the New California Republic Army, 5th Battalion, 1st Company. In 2281, he is the commander of the strike force sent to retake the NCR Correctional Facility from the Powder Gangers. If the facility is retaken, he is put in charge of NCRCF.

He is located between Primm and the NCRCF compound only if Eddie is betrayed during I Fought the Law.

Retrieved from "https://fallout.fandom.com/wiki/Lee_(Fallout:_New_Vegas)?oldid=3370060"
Community content is available under CC-BY-SA unless otherwise noted.